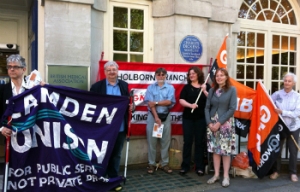 GMB  members employed by the Doctors organisation the BMA were on strike on Wednesday
20th June and the 18th July at eight locations across the UK in a 24 hour strike in a
dispute over pay. This is the first stoppage by BMA staff in the 180 years that
the organisation has been in existence as the BMA fail to respond to a GMB
request that talks be reopened with an improved pay offer.

Last month GMB members voted by a
majority of 81.2% to take industrial action over the refusal of the BMA to
negotiate an improved pay offer for 2012.

Anna Meyer GMB
Organiser, said “We are very disappointed
that there has been no response to our calls for more talks and for an improved
offer. GMB members are striking reluctantly as this is the first strike action
at the BMA in 180 years.
The offer is well
below inflation and the BMA can well afford to make an offer in line with
inflation.
What GMB members
find difficult to accept is that the BMA itself is embarking on industrial
action on Thursday 21st June over the government’s refusal to reopen
negotiations in their dispute.”

Further
days of  action are planned as the dispute continues.

This entry was posted on July 24, 2012 by CAMDEN TRADES COUNCIL.