The Government’s Lobbying Bill will change the rules about union membership lists, 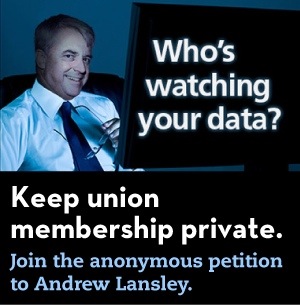 The Government’s Lobbying Bill will change the rules about union membership lists, giving more people access to them. Will you join our petition to Andrew Lansley calling on him to scrap this law, and protect union members’ privacy?

More details can be found below.

You’ve probably heard about the Lobbying Bill. It’s the Bill that charities and unions have been campaigning against because it will gag civil society from campaigning, and threaten free speech.

But the Bill also includes a threat to union members’ privacy.

This new law is not needed, and it is bad news for union members.

IT’S NOT NEEDED. The law already makes unions keep accurate membership lists and use independent scrutineers to run elections and ballots. If unions get something wrong then members can complain to the government appointed Certification Officer.
MORE PEOPLE COULD HAVE ACCESS TO MEMBERSHIP LISTS. The new law will also let employers raise complaints. Membership lists will be made open to the Certification Officer, a Membership Assurer (chosen from a government nominated list) and any investigators appointed after a complaint.
We’ve all heard the horror stories about union members being blacklisted. The last thing the government should be doing is giving the state and employers even more access to union membership lists.

This change in the law will worry many union members. They should have the right for their union membership to be private.

Help us protect union members by joining our ‘anonymous petition’ to Andrew Lansley.

To make the point that union membership should be private, our petition’s going to be deliberately anonymous – it will just include jobs and home towns – no names at all.
Help us protect union members. Join the petition today.

This entry was posted on January 2, 2014 by CAMDEN TRADES COUNCIL.