2 construction workers have been killed at work in the past few weeks. Kevin Campbell was a supervisor at the Stratford DLR site and was killed by being struck by machinery. Rene Tkacik was working on the Crossrail project when he was hit by falling concrete and killed. Another person was seriously injured in a crane collapse.
The Construction Safety Campaign held a vigil to remember Kevin Campbell and highlight safety concerns. David Cameron has declared he wants to “kill off health and safety culture for good” obviously caring more about his rich mates and their profits than workers whose lives are ruined by preventable accidents. Investigations into these recent deaths have not finished so we do not know the circumstances.
However, 148 people were killed at work last year in the UK and similar numbers every year. Many more suffer serious injuries in work related accidents. The construction industry has a lot more risk than many other workplaces but the risks are increased when bosses put on the pressure to cut costs by skipping safety checks and training or rushing workers.
One of SchNEWS’ writers, Simon Jones, was killed in 1998 on his first day at Shoreham Docks. He had been forced into the unsuitable job by hassle from the dole and was not trained for this skilled work. His death kicked off a determined campaign against the casualisation of labour and his family and friends fought to bring the companies responsible to justice.
The 28th April is International Workers Memorial Day. There is an event at Tower Hill by Tower Bridge Road at 1030am. There is also a call to Tweet on that day about preferring red tape to bloody bandages. #WMD14. SchNEWS isn’t so sure about the suggestion of sending photos of yourself to politicians – at least make them work to find out who to put on the next illegal blacklist!
Activists are still fighting for justice on the blacklisting scandal. You can find the Blacklist Support Group on Facebook and related blog at http://www.hazards.org/blacklistblog/ including a video of the attempt to citizens’ arrest Cullum McAlpine, a boss most implicated in the blacklisting. Many workers were put on the blacklist exactly because they were campaigning for safer working conditions, which just shows how much industry bosses really care about their workers. Safety normally costs their money but ignoring it costs our lives.
Media coverage of the high death rate among migrant workers in Qatar working on projects for the 2022 World Cup has apparently hastened slightly the building of better housing for the workers. Without sufficient food, water, sleep or sanitation it is no wonder so many of these workers are dying. If current trends continue there could be more workers killed than footballers playing by the time it’s all over. The IMF seems more concerned that the bad press will increase labour costs for the project. 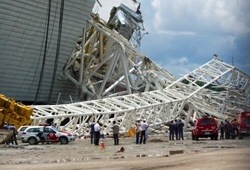 This entry was posted on March 21, 2014 by CAMDEN TRADES COUNCIL.